in the context of the activities of the “1821-2021 Initiative” for the 200th anniversary of the declaration of the Greek Revolution.

The anniversary exhibition “Run upon the waves of the mighty sea.1821.The Fight at Sea” was visited by the District Governor of Attica, Mr. Georgios Patoulis.

Mr. Patoulis, after a guided tour of the exhibition, said the following:
“I would like to congratulate the Eugenides Foundation, the General State Archives, and all those who contributed to the organization of this important exhibition, which should be visited by all citizens. It is a tribute to the Greek seafarers and the great maritime personalities of our country, who contributed to our country’s struggle for freedom. They are a model and a beacon of hope and we, as the Region of Attica, with specific actions, will promote every initiative in this direction”.

The Regional Governor’s tour of the exhibition was conducted by the Head of the Department of Promotion, Communication and Educational Activities of the GAC, Ms. Christina Sarra. In attendance, on behalf of the Eugenides Foundation, were Mr. Nikolaos Thomaidis, Project Manager of the exhibition, together with the architect Mr. Michos, Mrs. Theodora Giannitsi, Director of the Centre for Greek Culture in Moscow, the President of the Hellenic Foundation for Culture Mr. Nikolaos Koukis, Mr. Alkis Lebesis, Director and Founder of the Hellenic Institute of Holography, Mrs. Ekaterini Vlahopanagiotou – Batalia, President of the International Society of Greek Writers, Mrs. Gkorou-Rontou Amalia, Patouli’s collaborator on issues of Expatriate Hellenism and Mr. Panagiotis Mamalis, founder of “Greeks Over the World”.

In the framework of the exhibition the following educational programmes are taking place:

VR tour.
Using virtual reality (VR), the Eugenides Foundation and the General State Archives invite people of all ages to take a digital tour of the anniversary exhibition “Run upon the waves of the mighty sea. 1821. The Fight at Sea”, guided by the mermaid – the captain of a Hydra type ship.

“Stories of the sea – The Greek Revolution at sea”.
The programme aims to familiarise students with the environment of the exhibition and the nature of the exhibits. It includes a live tour, introduction to the archival material, watching videos, group activity and VR experience of a virtual tour of the ships of the Navarino.

Like a small ship in port…
In the context of the educational programme, students are invited to use the archival material at their disposal and, with the help of digital applications and innovative methods, to act as explorers and solve mysteries or to take on the role of war correspondents to spread the news of the Struggle using the secret codes of the time.

The programme is aimed at primary and secondary school students. It takes place online only

1821 waves – 200 years of freedom
The educational programme attempts to make an imaginary journey through the naval warfare of the 1821 Revolution, using archival documents and sources, modern methods and free online tools. It gives students the opportunity to learn about the events, ideas and actions of the heroes of the War of Independence at sea.

The programme is aimed at primary and secondary school students. It is carried out both face-to-face and online. 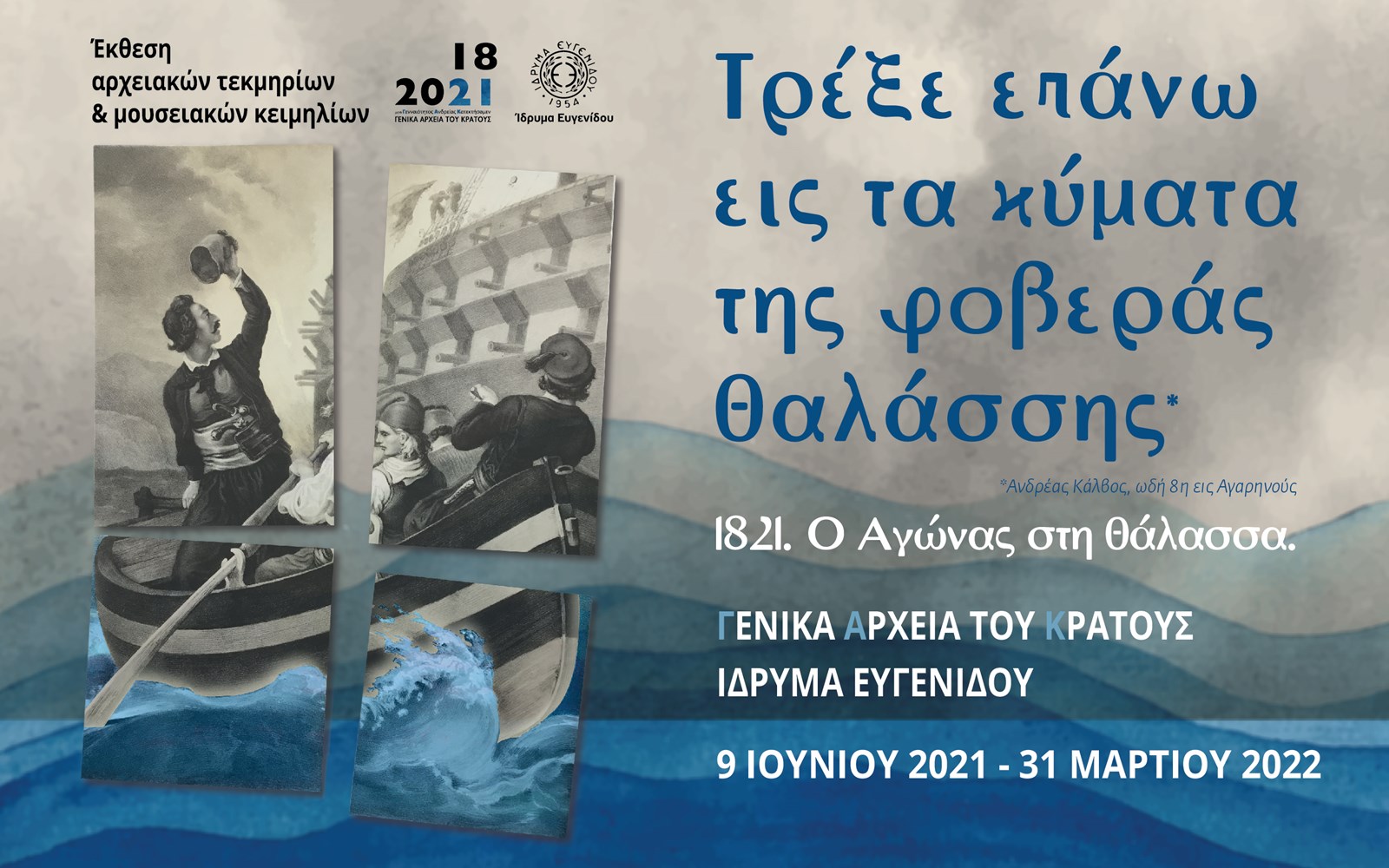 The Eugenides Foundation and the General State Archives offer you the opportunity to download the catalogue of the exhibition “Run upon the waves of the terrible sea” 1821. The Struggle at Sea”.
The publication, which includes all the archival documents and museum relics presented in the exhibition, was produced by Ziti Publications, with the exclusive funding of the Ministry of Shipping and Island Policy – General Secretariat for the Aegean to the General Archives of the State.

FREE ENTRANCE
The public can issue their admission ticket online via e-ticket.

*The use of virtual reality (VR) equipment is reserved for adults and children over 12 years of age and in accordance with the rules of proper use.