Omolio is a historical settlement of the Municipality of Agia surrounded by great natural beauty. Located in a central location, 40 km from the capital of the Larissa regional administration, just three kilometers from the Athens-Thessaloniki national road and at a minimum distance from the sea. According to Homer, the city participated in the Amphictyony of Delphi, while the mint of Ancient Omoli was one of the greatest in central Greece. The ruins of this ancient city and citadel still remain close to current Omolio.

Conditions brought the village back  close to major historical events. This is the soil in which Marinos Antipas is buried, one of the most important figures of Greece in the fight to defend civil liberties. When Antipas came to Thessaly, where he took over as caretaker of the property of his uncle, he changed social conditions in the region. Although he was in a position of strength, he deleted agricultural debts, applied Sunday as a day off and set the remuneration of tenant farmers based on 75% of production (instead of 25% as was up to then in force). His murder was the natural consequence in a place dominated by lthe andowners of the time. 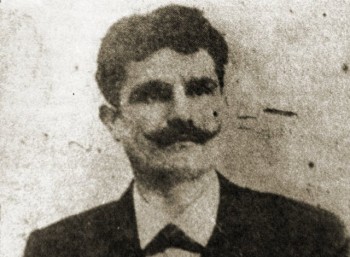 Nowadays, the local community commemorates him, recognizing his contribution to changing social conditions, both in the region and across the country. It built a modest monument erected in Omolio where events are held every year in memory of the great fighter. At the same time, it gave his name to the small museum built in the village: Omolio Folk-Agricultural Showroom Marino Antipas, housed in the former Community chambers, located in the village square.
Today, the exhibition presents the tools used by the people for whom Antipas fought. Inaugurated on 18 March 2007 to mark the 100th anniversary of his death (murdered in 1907 in Pirgetos). Premechanical agricultural and foraging tools are hosted in the exhibition venue. Visitors can also admire tools of traditional occupations (fishermen, shoemakers, weavers, etc.) and objects from daily life of local people: handicrafts, embroidery and textiles, utilitarian household items (sofras (low tables), pots, pinakoti (bread levening boards)), local costumes, traditional clothing, woodwork items, postcards and engravings, coins, antique furniture, and a local bisiki (cot).

The collection includes artifacts that may be considered historical documents: a local’s military diary, which describes in detail the experience of the war in Asia Minor, but also photographs of social events and the occupations of the inhabitants. The showroom has a conference hall that holds 50-60 people.

Places like the Omolio Folk-Agricultural Showroom Marinos Antipas, although exhibiting objects from earlier times, alsoshow that traditional culture is not a static body of evidence that survives only in a museum. Because on the one hand, tools and materials actually bear witness to the immutable characteristics of an era (available resources, raw materials), however, they also reveal the basic principles of human creativity that lead to evolution. The name of the exhibition reminds us, at the same time, that this creativity should always be developed with concepts such as respecting the principles of human law and social justice.

On the last weekend of January (28-29 / 1), The Athens Concert Hall organizes for the first time the Piano days @ Megaron, a festive two-day dedicated to the piano, with concerts that will highlight the adaptability of this magical instrument to the different types of music, with educational activities for young and old and unexpected musical encounters. In this context, the Megaron's collaboration with the Steinway Prizewinner Concerts Network (SPCN), a world-class artistic body, which promotes award-winning soloists who have distinguished themselves in major international competitions, is inaugurated. Among others, we will hear Jean Louis ...More

Thessaloniki takes another step towards sustainable development on Monday, January 30 at 13.00, with the inaugural event of the mission "Climate Neutral and Smart Cities" (NetZero Cities), at the International Center for Digital Transformation and digital skills of Cisco . This mission supports the transformation of European cities towards climate neutrality by 2030, as part of the UN 2030 Agenda, the 17 Sustainable Development Goals (SDGs) and the European Green Deal to improve citizens ' well-being. In April 2022, the municipality of Thessaloniki was selected by the European Commission, after a tender process, to participate in ...More

Message from the Rector of AUTH, Professor Nicholaos G. Papaioannou, on the International Day of Remembrance of the Victims of the Holocaust

The millions of Jews who perished in the Holocaust are commemorated today, International Day of remembrance of the victims of the Holocaust, reflecting on their persecution and martyrdom. Among them are the victims of the Jewish community of our city, which was painfully affected. Along with the due honor and memory, on this day we turn our eyes to the future. Hatred and the phenomena of anti-Semitism and intolerance have unfortunately not disappeared. Even today, clearly fascist actions concern the current situation. Actions that have no space in modern, well-governed states that defend freedoms and Human ...More

The annual event of Hotelier Academy returns in February with free hotel webinars, evolving the way it is conducted, as it allows the public to attend each seminar either online or close to the conference space of Radisson Blu Park Hotel, Athens. Hotelier Academy Greece renews its appointment with the Greek hotel public at the 5th round of free webinars, from February 6 to 10, where it will present specially designed educational content in collaboration with the leading companies in the sector. In addition to the ability to watch online via Zoom and Social Media of ...More

MA “Film and Television Studies” from the Aristotle University of Thessaloniki

The Athens Concert Hall was inaugurated in 1991 by Christos Lambrakis. However, the effort for its creation began already before 1953 with the foundation of the Association Friends of music by Lambros Eftaxias and Alexandra Trianti. This year the Association completes 70 years of operation and continues to be a supporter and guarantor of the operation of the Athens Concert Hall. With emblematic concerts, new compositions, workshops, masterclasses, podcasts, publications, exhibitions and online activities, the Association Friends Of Music will celebrate this year the anniversary of its 70 years of contribution to the cultural life of ...More