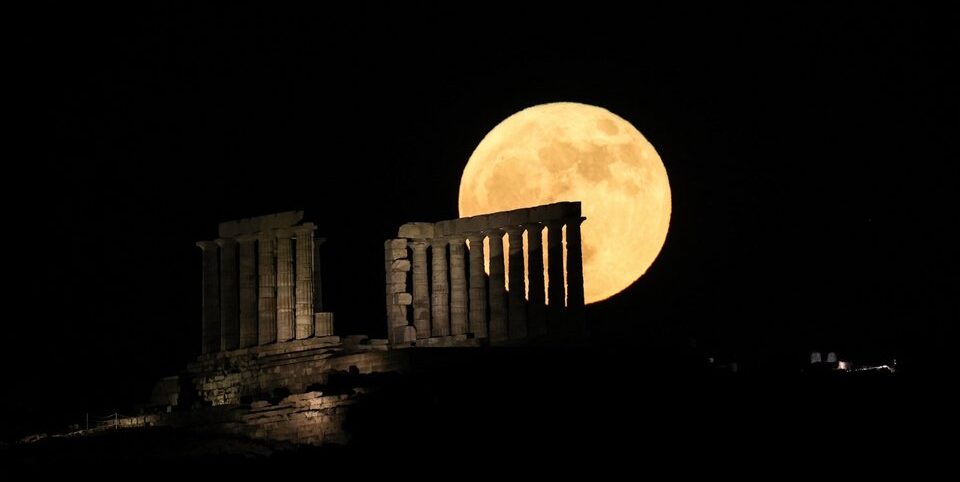 Already in antiquity, Selene took her place in myths as the goddess of the moon, daughter, wife and mother of gods and divine creatures such as Leo of Nemea and Hores (who represented the seasons of time). However, her most famous love affair was with the mortal shepherd Endymion, whom she put into eternal sleep so that he would never die. 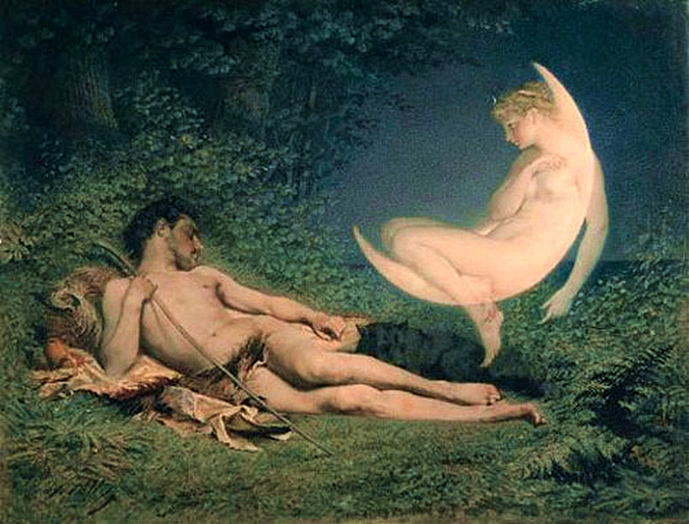 Similarly, as Luna she was worshipped by the Romans who had given her a triple status according to the phases of the moon: Luna for the full moon, Hecate for the period when the moon is unseen and Diane for the new moon and its first days.

The Moon was certainly worshipped all over the world, in the Mediterranean, America, Australia. Myths and cults associated with the phases of the moon were associated with fertility, magic, divination. 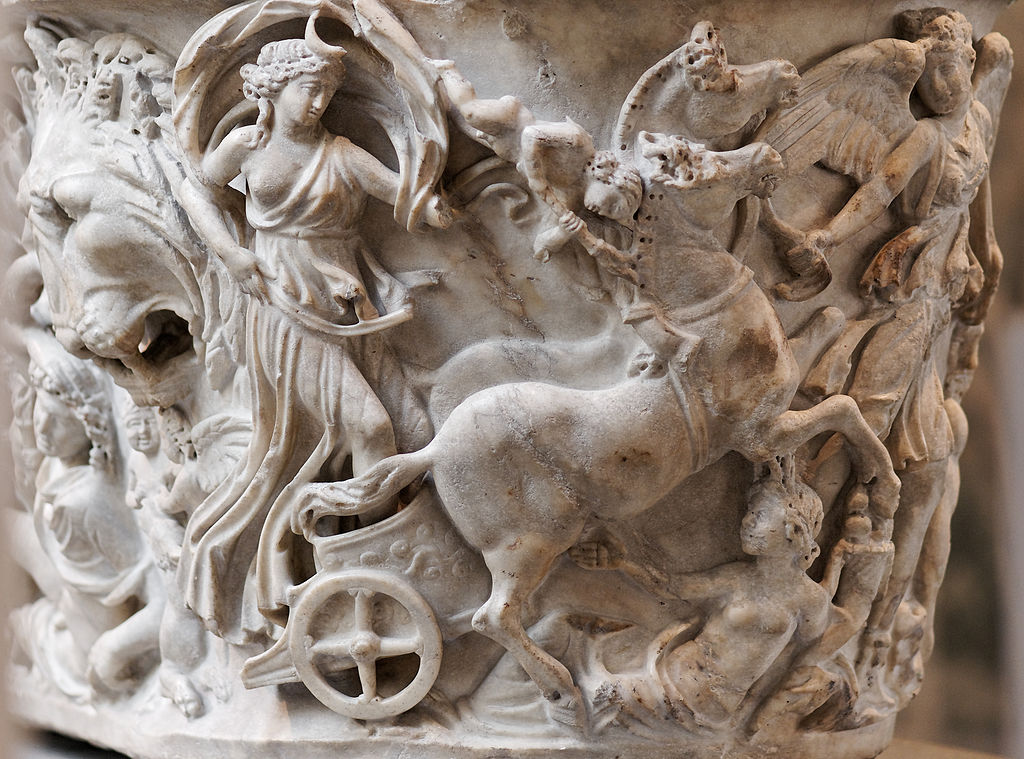 Selene on her chariot, detail from the case of sarcophagus with the myth of Endymion and Selene. Roman artwork of the Imperial period.

Of course, the moon, along with the sun and the stars, were for millennia also observed by sailors, shepherds and farmers in order to predict weather conditions, calculate distances and routes.

Now man has studied, photographed and stepped on the moon. Yet Science has not been able to shake off its fascination. The Full Moon in particular continues to “enchant” the world.

The August Full Moon is the most “popular” in our country not only because of its brightness and size but also because it coincides with a holiday period. Most of us have the opportunity, perhaps with less stress, to see the moon in some, beach, mountain, forest, in some landscape that “fits” best with the Full Moon.

The Ministry of Culture and the Ephorates of Antiquities of the country open archaeological sites and monuments for the evening of the Full Moon on August 12 and organize events all over the country offering a unique experience.

The Acropolis Museum will celebrate the August Full Moon on Friday, August 12, 2022, with Greek songs about the moon, film music and well-known foreign melodies by the historic music band of the Air Force Band, in its courtyard at 9 p.m. The Museum will remain open until midnight and admission will be free from 9 p.m.

In Sifnos, the Cyclades Antiquities Ephorate will hold events at the Acropolis archaeological site in Ag. Andreas which will be open from 17.00pm to 24.00pm with free guided tours by the staff of the Service. On the evening of the same day, at 21.30pm, it has planned a musical event entitled “moonlight songs” with Elli Paspala, David Lynch and Takis Farazi with melodies, exclusively about the moon.

In Thesprotia, the Archaeological Museum of Igoumenitsa will remain open until midnight and visitors will have the opportunity not only to browse the halls of the Museum but also to admire the Full Moon from the terrace of the first floor.

The Archaeological Site of Elea, in the Municipality of Souliou, on the evening of the celebration, will host the musical event “Singing in the light of the Moon” with the vocal ensemble “Anerae” and the choir of traditional music of the Cultural Association of the Settlement of National Resistance of Igoumenitsa, in the open-air event area outside the ancient fortification. Starting time of the event: 9.00.

The Archaeological Site of Kalis Vrysi will host a music event with the band of Kostas Karaveritis and the Archaeological Museum of Drama will remain open until 23:00 with information from an archaeologist of the Ephorate.

Entrance to the archaeological sites, museums and events on the evening of the Full Moon is free of charge. 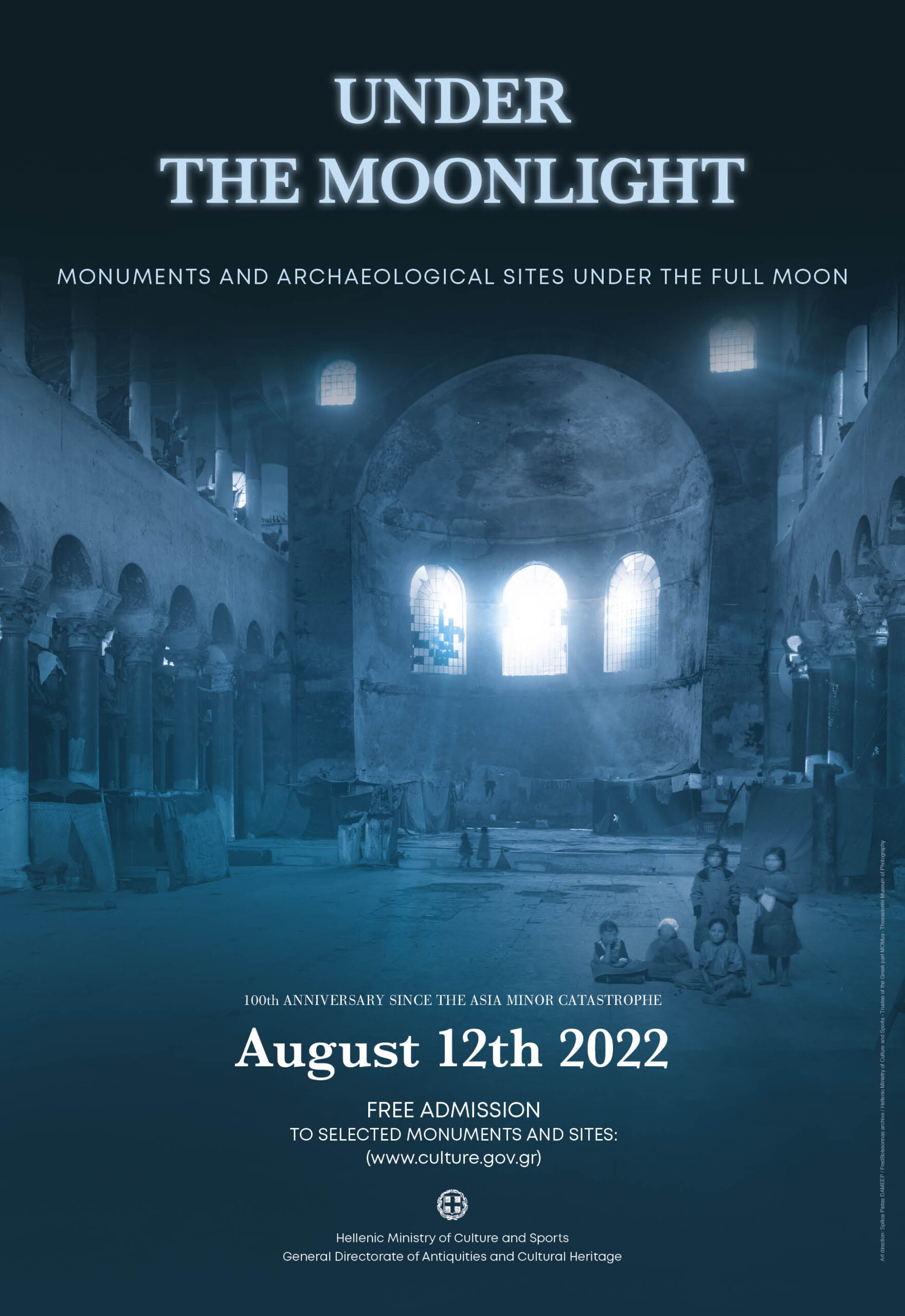 The Ministry of Culture and Sports organizes, for one more year, the events of the August Full Moon with free admission for the public, in selected archaeological sites, museums, historical sites and monuments.
On Friday 12 August 2022, 105 archaeological sites, historical sites, museums and monuments across the country will welcome the public under the light of the full moon. Events will take place in 50 archaeological sites and museums, while 55 will remain open to the public with free admission. This year’s event will be accompanied by events on 11 August, as well as on 13, 19, 20 and 27 August. The programme includes mainly concerts, but also theatre and dance performances, poetry evenings, screenings, stargazing and guided tours, many of which are organised in cooperation with local authorities and local associations. The programme is coordinated by the General Directorate of Antiquities and Cultural Heritage.
This year, one hundred years after the Asia Minor Catastrophe, the event is dedicated to the event of the Exodus of Hellenism from Asia Minor and the trace it left in the collective memory. A photograph by Boissonnas entitled “Achiropeitos as a camp of Greek refugees from Thrace and Asia Minor” was chosen as the theme of the poster for the events. It is a shot taken in 1919, and the refugee children captured were there from other disasters brought on by the First World War. However, this photograph is a timeless record of uprooting, unexpected loss, flight and wonder in the face of an imposed fate.
We thank the Services of the General Directorate of Antiquities and Cultural Heritage, as well as the Services of the General Directorate of Restoration, Museums and Technical Works, which is participating in the event for the first time this year, for continuing the institution of the August Full Moon events at our monuments, which has already been held for 22 years without interruption.
The events and public visits to the archaeological sites and museums will be carried out in accordance with the security protocols established for each archaeological site and museum, in the context of limiting the dispersion of the COVID 19 corona and in accordance with the security measures in force during the period of their implementation.

Note: In the attached file you will find the full programme of events.