Signing of a Memorandum of Cooperation between the Ministry of Culture and Sports, the Academy of Athens and the Municipality of Athens for the promotion of the Archaeological Site of Plato’s Academy and the operation of the International Community of Academies.

A Memorandum of Cooperation for the Promotion of the Archaeological Site of Plato’s Academy and the Operation of the International Community of Academies was signed between the Ministry of Culture and Sports, through Minister Lina Mendoni, represented by the Secretary General of the Ministry, George Didaskalos, the Academy of Athens, through its President AntonioosRegakos and its Secretary General Christos Zerefos, and the Municipality of Athens, through the Mayor of Athens, Kostas Bakoyannis.

With the Memorandum of Cooperation, the Ministry of Culture, the Academy of Athens and the Municipality of Athens, declare their willingness to cooperate and define the principles and basic terms of their cooperation, with the aim of:

– The design of the infrastructure for the operation of the International Community of Academies in the context of the studies to be carried out for the construction of the Archaeological Museum of Athens. The International Community will be based in the building of the Archaeological Museum of Athens, while the members of the Academy of Athens, foreign Academies and European and international academic associations will have their own meeting and event spaces.

As Minister of Culture and Sports Lina Mendoni said, “This is an important day for the history of Athens. We are working with the Academy of Athens and the Municipality of Athens, at a rapid pace, for the redevelopment and enhancement of the archaeological site of the Plato Academy and the creation of the Archaeological Museum of Athens, which includes spaces for the Community of Academies. The Services of the Ministry of Culture and Sports have worked systematically and intensively to implement the plan for the enhancement of the Plato’s Academy. The relevant studies for the redevelopment of the archaeological site have been approved by the Central Archaeological Council. The strategic objective of the three signatories of the Memorandum is to revive the spirit and values of ancient philosophical and political thought. The history and archaeology of Athens is highlighted in the currently not very prominent area of the Plato’s Academy through the unique archaeological remains and finds, a green park is created accessible to all citizens and visitors of the capital, the Archaeological Museum of Athens is established in order to exhibit findings of exceptional importance from the excavations of Athens from the 1960s onwards. Centred on the Gymnasium of Academe and the Plato School of Philosophy, we are creating a space of major importance for knowledge and recreation.”

The Secretary General of the Academy of Athens Christos Zerefos stressed the importance of fulfilling the sacred duty of the Academy of Athens to one of its and the country’s greatest benefactors, Panagiotis Aristofronas, who in the relevant terms of his will of April 7, 1937, stated among other things: “… On April 7, 1974, on the basis of the above-mentioned provisions of Article 7.4 of the above-mentioned Articles, I wish that these premises be transferred, after the death of my dear wife and heiress, to the Academy of Athens, now established in SinaiaMegaro, to which I bequeath them, on condition that they remain there intact and that they form part of the whole area of the Plato Academy in perpetual venerable pilgrimage, and that on these premises the “International Community of Academies” be founded, the statutes of which I have, for years already, submitted to the said Academy of Athens … I ask the Athens Academy to ensure the best possible maintenance, security and cleanliness of the aforementioned premises. In addition, I strongly urge the Academy to continue the excavations until the complete revelation of all the monuments, … and especially to undertake persistent research to discover Plato’s tomb and to take care of its maintenance and protection. 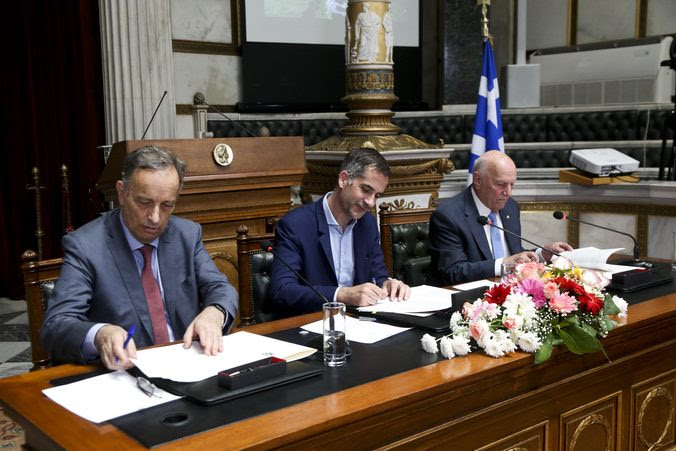 The Mayor of Athens, Kostas Bakoyannis, made the following statement. Today’s day, which comes decades late, we owe it to the Ministry of Culture, to the Bureau of the Academy of Athens and to the special “fighter” Christos Zerefos. The signing of this memorandum has more than just a symbolic value. It is an agreement that marks the beginning of three different, but equally importantprojects at the Plato Academy. Second, the construction of a park of the future, based on the new bioclimatic design, in terms of sustainability and viability. And third, the creation of the Athens City Museum, which we aspire to be the first green museum in the country. Already, an architectural competition for this museum will be announced in the coming weeks. The Museum will also house the International Community of Academies. The project at the Plato Academy is a pioneering one. We want the Museum of the City of Athens to be an integral part of the life of the neighbourhood. We still have a lot of work ahead of us, but I am confident that the result will justify our efforts and highlight a project that is of great importance not only for Athens, but for the whole country.”

It should be noted that the Ministry of Culture and Sports and the Municipality of Athens, as of April 2021, have drawn up a Programmatic Agreement for Cultural Development, with the aim of further enhancing and protecting the archaeological site and monuments of Plato’s Academy, improving and upgrading the infrastructure and protecting the natural environment, with a total budget of 3,837,432.08 euros.