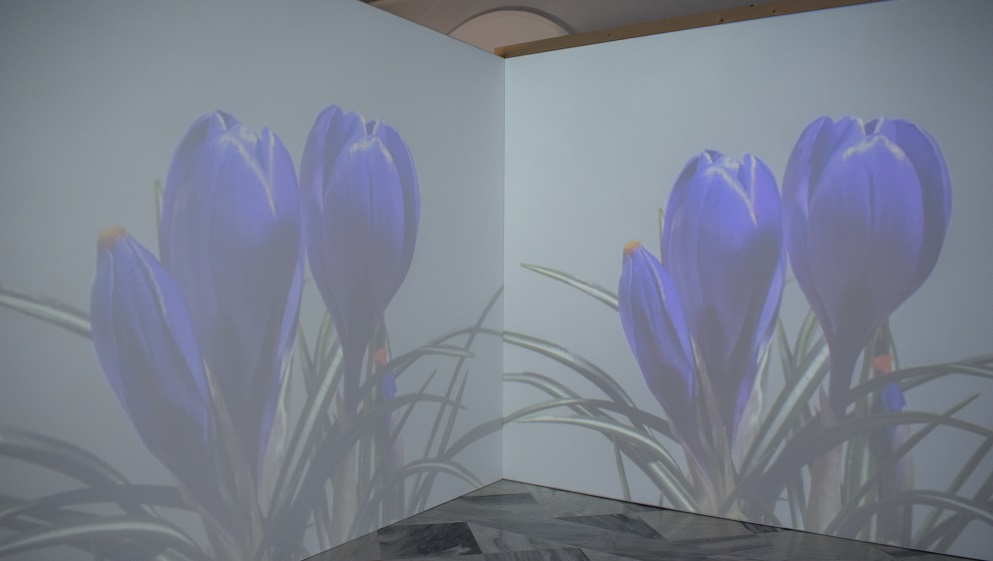 One of the four exhibitions presented at the international exhibition “Peter Pan. La nécessité du rêve”, currently on display at Palazzo Bonvicini in Venice, Blessing in Disguise is going independent and travelling to its home island of Hydra, where the original idea was born.

In June 2021, four artists and two curators met at Villa Valentine in Hydra as the protagonists of an artistic summer workshop. The goal of that week was to conceive the major exhibition that the Valmont Foundation would present in 2022. Didier Guillon, SilvanoRubino, Isao and Stephanie Blake, under the guidance of Francesca Giubilei and Luca Berta, inspired a single project. This work would consist of moving images that would interpret in a contemporary way the central themes identified in J.M. Barrie’s 1911 novel, Peter Pan and Wendy, in a contemporary way. 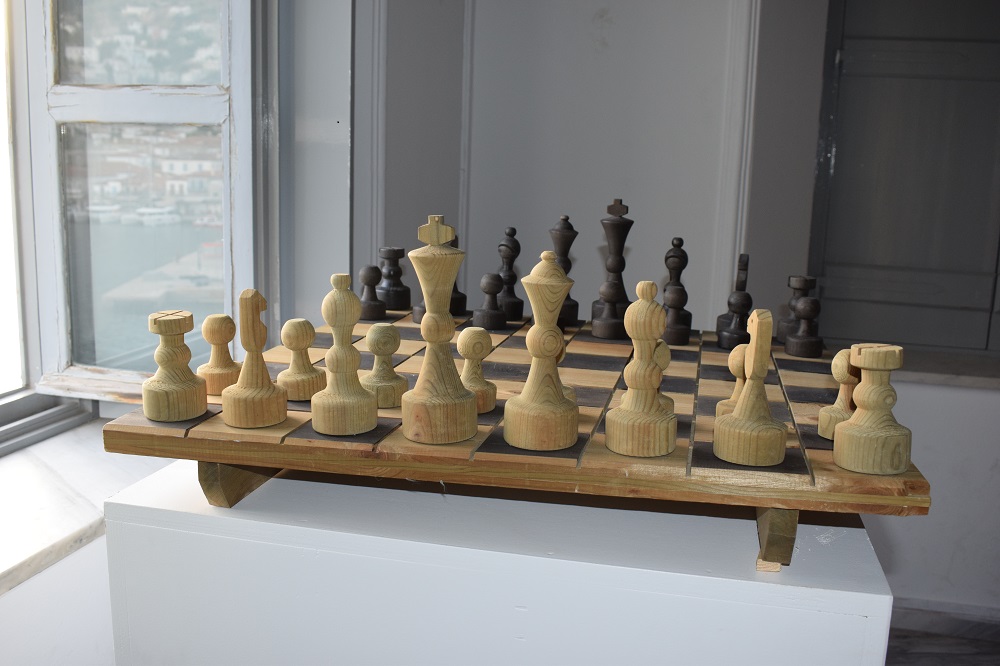 Didier Guillon was assigned the theme of dual contrasts. For this concept, he prepared a specific moodboard: black and white war photographs combined with blooming colourful flowers. The translation within the historical context emerged naturally: The power of flowers was a slogan used in the late 1960s and early 1970s as a symbol of passive resistance and non-violence against the Vietnam War. The expression was coined by American Beat poet Allen Ginsberg in 1965 as a means of turning war protests into peaceful, positive spectacles. 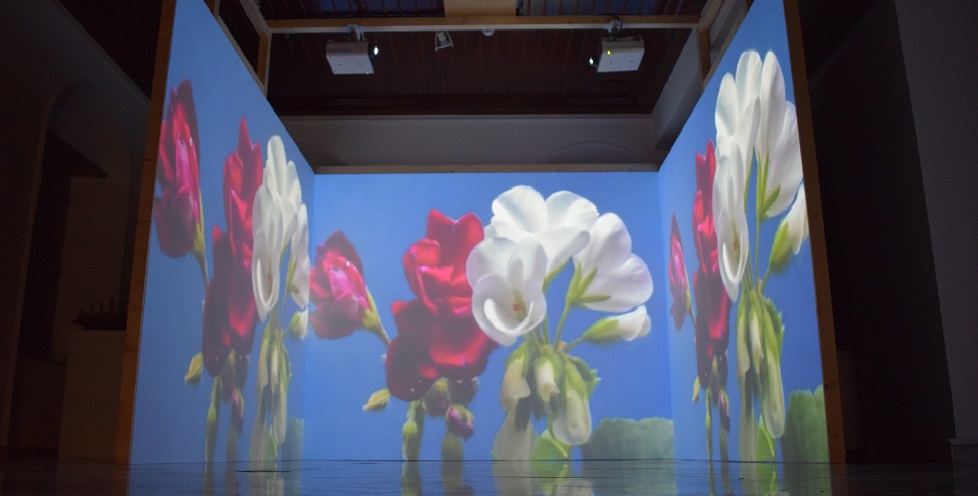 Neverland is a non-existent place where different environments interact and the characters that inhabit it come face to face. The prairies where the Indians live extend uninterrupted to the tropical bay where the pirate ship is anchored and the mermaids swim. The temperate forest, where Peter’s children sleep in underground burrows, reaches up to the tops of high mountains. The cycles of nature regulate everything from the rituals of different social groups to their relationships. This imaginary world, just like the real one, is pervaded by conflicts and turmoil, which are only offset by the beauty and precision of nature. In Blessing in Disguise, Didier Guillon, in collaboration with his daughter Valentine, reconstructs this duality through a video montage of old black and white photographs of historical war conflicts. With a metaphorical reference to the representations of the power of flowers, the artists highlight nature and all its beauty and creative power as the tool for building an earthly “paradise”, which is contrasted with the absurdity and brutality of the conflict. The artist does not escape to a non-existent island, but, through his work, helps us to imagine and create possible new and realistic worlds. Mixing black and white stock images of wars with videos of colourful flowers in accelerated motion, the two artists examine the cyclical course of history. At the same time, they juxtapose human folly, violence and destruction with nature’s exciting and instinctive life force.

One place happens to be the common point of our artists. The Greek island, being historically a haven for artists in search of inspiration, hosted the creative workshop that gave birth to the exhibition. Chora of Never, Le pays imaginare, L’isolache non c’è: many names to describe this almost sacred destination, cradle of Western civilization. 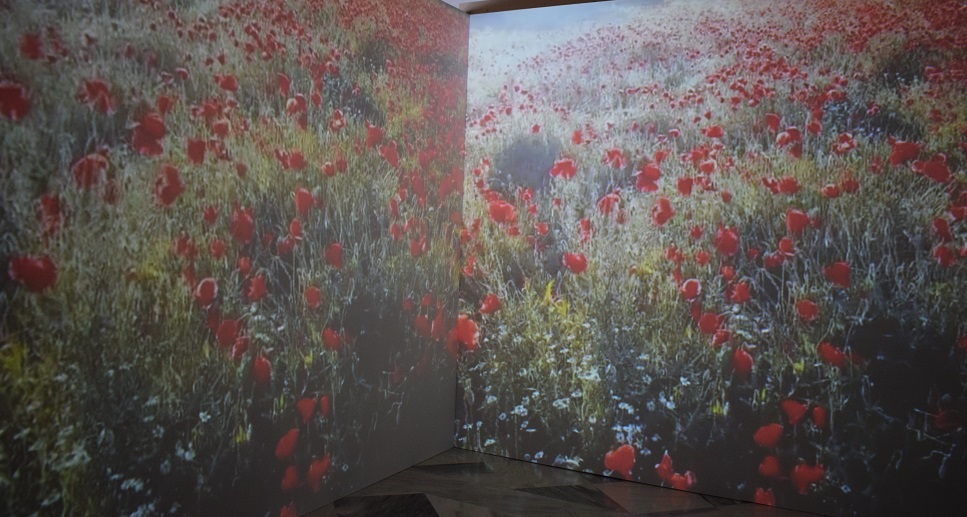 There is a point that connects the basic idea of Blessing in Disguise and the Historical Archive – Museum of Hydra, where the exhibition takes place: history as a keyword. The exhibition of historical memory is the most effective means of communication with visitors. The aim of the I.A.M.Y. is to identify, collect, classify, list and publish all kinds of archival material related to Hydra, local history, tradition and culture. The Museum, which was founded in 1918, exhibits, among other things, cultural treasures related to the Greek Revolution of 1821. The victory of the Greeks and the inhabitants of Hydra continues to be the subject of celebrations such as the Miaouleia.

Didier Guillon comes from a large family of artists and collectors. From there came this irresistible urge to create, which is reinforced by his insatiable curiosity and energy. He explores a wide variety of techniques, from screen printing, painting, cardboard and glass statues, to large-scale installations. His artistic work allows him to reflect on important themes.

For the Guillon’s, art is a family affair. From a young age, Valentine gave inspiration to her father, as with the story of the gorilla IVO, who became one of his idols. With Blessing in Disguise, Didier challenges his youngest daughter, sharing with her his perception and giving space to the teenager’s imagination. The Guillon duo exchange ideas under Didier’s impetus. Valentine adds a youthful perspective to the sequence of images… giving life to a fantasy world that is so real.

As a creative place for artistic workshops, Villa Valentine was shaped as a space of inventiveness in the preserved environment of Hydra, which has been a place of meetings and inspiration for artists since the 1960s. Representing the Valmont Group’s hospitality pillar, Les Résidences Valmont, Villa Valentine is a classic Greek home, 1.5 hours from Athens. The influence of art was fundamental in the decoration of the villa for Didier Guillon, who took the bold decision to choose the artwork, the colour palette of the furniture and the upholstery fabrics. The bright living room, which is furnished with branded pieces, leads to a magnificent terrace by the water, where one can enjoy the sunset over the Aegean Sea: the perfect location for creating and relaxing