“The other sea”, group art exhibition at the Historical Archive-Museum of Hydra for the 100 years since the Asia Minor Disaster, until February 2023 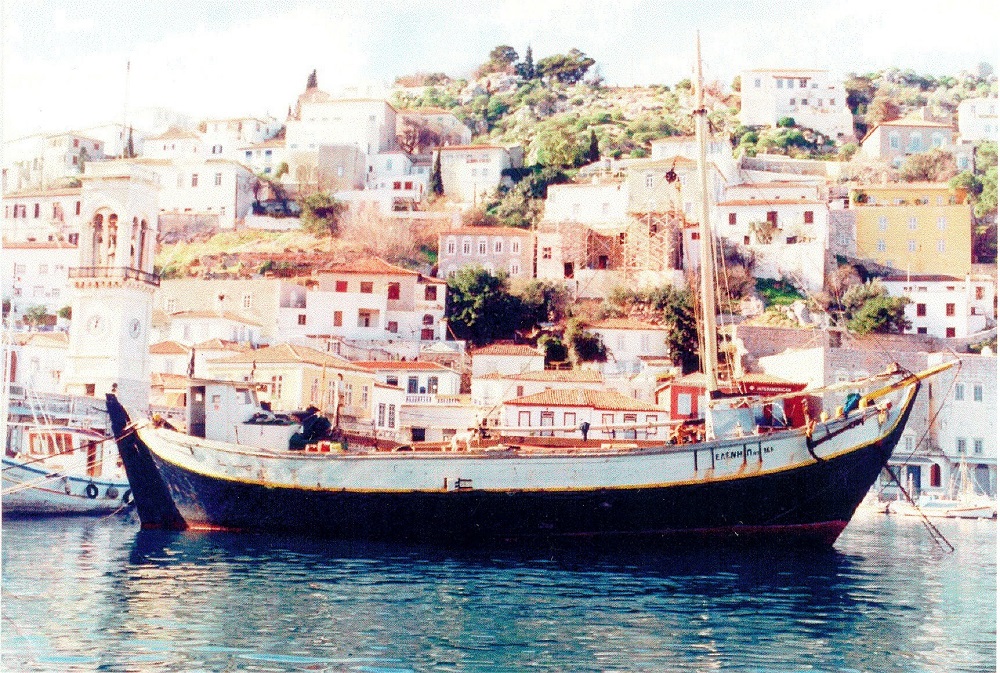 “…From the place where I came from, they know how to love…”

The Argosaronic and the Sporades, Hydra and Skiathos, are connected by an “unbreakable maritime bond”: the traditional boat “ELENI P”, declared as a historical monument by the Ministry of Culture, a caique of the type of a boat that was born in Skiathos and grew up in Hydra, carrying the food of the island for more than 50 years.  This was the main reason for the transfer from Skiathos to Hydra of the exhibition “The Other Sea”, which is taking place, among other things, in the context of the anniversary event of the Historical Archive-Museum of Hydra and the Municipality of Skiathos for the 100 years of the Asia Minor Catastrophe, with the participation of forty distinguished visual artists.

As a minimum tribute to the 100th anniversary of the Asia Minor Catastrophe, a group visual and symbolic installation was designed, based on a true historical event of the island of Skiathos: the universal flight of the inhabitants of Agia Paraskevi of Cesme, shortly before the tragic events of 1922. Saving a multitude of people and escaping themselves with their famous fishing boats just before the disaster, they sought a new home in Skiathos.

The bulk of the works of the “Other Sea” are presented inside the Museum, in its large exhibition space. Most of the works, almost all of which, with a few valuable archival exceptions, were created for the needs of this exhibition, are three-dimensional and two-dimensional depictions of symbols of memory of the Other Sea or floating means (fishing boats and other small ships) that were the way of passage and rescue of the refugees from Agia Paraskevi to Skiathos. And at the same time, the way and the main means of survival from the next day. Their field of reference was the physical and symbolic meaning of the life-saving sailing to the Other Sea and the passage from Agia Paraskevi of Cesme to Skiathos. From the first, the old, to the new homeland.

They thus converse with respect and visual consistency with the historical events that influenced the history and the population of the island of Skiathos. Furthermore, with the relics and old photographs, with the family stories and with the unquenchable memory of the Asia Minor inhabitants of Skiathos. Finally, with the literal and metaphorical coordinates, with the literal and metaphorical depths of the Other Sea of their lives. An Other Sea that Seferis swam in his verses, an Other Sea that Angelopoulos’ last gaze nostalgically looked at. Another Sea that the visual artists participating in this project have turned it into a new, fascinating, lived narrative and their own affair of love and memory.

“A boat called Agia Paraskevi sails towards Skiathos… It brings with it another, vast, living and undulating sea. Coastal Asia Minor landscapes, vases with depictions of fishermen in symbolic timelessness, burnt images of a lost shore, songs of the sea on drawers washed up by the wave, memory of Ephesus and ancient soil. Family trunks painted with dowries and dressed with vows, embroidered tales of wandering, floating wind chimes of pearls and beads, hulls of bronze, wood, paper, sheet metal, reed, wire and straw – vehicles of freedom sailing for Skiathos. Silk clutches of memory, stories of transition and moments caught in the nets, memories of sailing hand-painted and made with finds from old tarsana. Shells sculpted from steering wheel and iron, figures of people in a nod of farewell, flaming matrices or sternless boats, rhythmic sea chugs and rods. Traces of refugees and dreams engraved on paper, sea saints and painful daughters of Skiathos, bright iconostases of memory, sea knots of adventure and response, loads of refugees painted white – now in a dark abyss, essays of ships historicized in the manner of hagiography, orbits of a symbolic Great or Holy Friday epitaph. Old trays with landscapes of Kioste and Antigone of the Prigiponnese, the churn “Fokea” of the first persecution and the sailing merchant ship “Agia Paraskevi”, sailing in the eastern Aegean – precious models of ships made of maple and boxwood, the Taliani painted on an old board and the bags of the Aegean. Precious tributes to the Virgin Mary Thalassomachousa, made with embroidery, priestly fabrics and old relics, chramia with refugees and bathers woven on the loom with thread and pebbles, unbleached cloth salvaged from collapsed cabinets, precious embroidered boats – prayer boats and others with intimate paper shadows, clay bogs loaded with the wounded shrines and holy things awaiting rebirth. Lace-scented floating prayers with kumquatahia hoods made of cocoons and silk, well-kept keys of the houses left behind, skirts – bobbins in the sea, gussied up with family photos and true tales of gluttony, woven on the loom of collective memory,” notes Iris Kritikou in the exhibition catalogue.

The artists participating in the exhibition are:

On the occasion of the exhibition, a book of the same title was published and circulated, designed by Nikos Leontopoulos and with texts by:

Thodoris Tzouma, Mayor of Skiathos, Dina Adamopoulou, Director of IAMY, Maria-Eleni Ververi, President of the Asia Minor Society of Skiathos and Iris Kritikou, Art Historian and curator of the exhibition.

Parallel activities and educational programmes are planned in the framework of the exhibition.

The coastal village of Agia Paraskevi or Kyoste (present-day Dalyan) on the Eritrean peninsula was located five kilometres north of Cesme. The name Kyoste – kiosi, is connected with the fact that St. Paraskevi was the place of recreation of Cesme. Three churches divided the village into respective parishes, one of them being Agia Paraskevi, hence the name of the place. With a pure Greek population of 5,000 inhabitants, Agia Paraskevi was the most important captain’s village in Eritrea, with more than 300 fishing boats reaching as far as the Adriatic – a village unique for its fishing fleet and high annual income in gold pounds from fishing. With trawls and windmills rare or even non-existent for the rest of Asia Minor and Greece, with fishing boats, the inhabitants of the village were famous for their success and knowledge of seamanship and the art of fishing. And when the Turkish hordes attacked the Greeks of Asia Minor, the fishing boats of Eritrea, carrying as many as they could, saved thousands of people from certain death. The victims from those villages in the 1922 persecution were few as all of them left in time. With the exception of one priest who stayed behind and who was killed by the Turks at the shrine as he did not want to leave his church.

The fact that the area was known to the fishermen of Agia Paraskevi and Cesme as early as the end of the 19th century explains why so many refugees from the wider region of Eritrea chose Skiathos. That island, which looked a lot like their own village (even the characteristic peninsula named Bourtzi existed in both places), was a popular fishing spot (as was, of course, Kavala or Nea Michaniona where many others also fled). Trying to continue their lives after the persecution, the legendary trappers sought their familiar rods – the sea passages, gradually making Skiathos a major fishing centre of the region and reverently carrying there their own traditions, customs and traditions. Of the total number of refugees who arrived on the island, 60% were from Kyoste, 30% from Cesme and 10% from the villages of Marmara.

The will of the Eritrean Micronesians to get back on their feet proved to be a catalyst for their new beginning in Skiathos. Soon the strong community created on the island claimed a new life, while keeping the past memory intact to this day. The songs and family heirlooms, the photographs and the unchanged tastes or even the touching Asia Minor names that we still find today on some of the fishing boats of the island, testify to the unbreakable strength of the ties between the unforgettable and the new homeland.

From the invaluable for its varied information and voluminous book by the young one-time refugee Yannis Ekaterini entitled “Lost Homeland, Our Village of Agia Paraskevi of Cesme (Kyoste) 1760-1922”, first published in 1984, we learn that Agia Paraskevi, before it was finally abandoned in 1922, was already tested in 1914. The first persecutions forced its inhabitants to temporarily leave their homeland and head for Chios and Skiathos. Some have since settled there. But even those who returned, left in 1922 for good. In Skiathos, Kavala, Nea Michaniona, Thessaloniki (Nea Fountain), Alexandroupolis, Volos, Chalkida and Piraeus, apart from the art of fishing, they transferred their valuable culture, their folk and cosmopolitan tradition, contributing essentially to the development and the new face of Greece, which was also attempting to move forward at that time, leaving behind extremely difficult conditions.